Download the PSD and Images used in this article. Then follow along and recreate it, or make your own!
Download the Castle Ruins Assets and PSD!

It's about rebuilding what was seemingly lost. In the current situation around the world I think it is important to remember that from tough circumstances good things can come. That even though times are challenging, there is always a light at the end of the tunnel.

After looking at the images in the pack I got a very strong Lord of The Rings / Game of Thrones vibe from it. I wanted to do something to pay homage to Alan Lee’s work that I first discovered as a teenager. It had a huge impact on me and I felt it was a good opportunity to do something outside my usual sci-fi themes. I started by laying in the sky to help establish the lighting I’m going for. I make further adjustments to the sky to draw a natural focal point in the upper right third. I also adjusted the values to a slightly lighter value.

Next up was adding in some mountains. I knew that the focal point will take up a lot of the space so I didn’t bother adding complete mountain ranges - only what will be seen by the viewer in the final.
I continue to build depth by adding some cloud cover in front and behind the mountains. This also helps creating separation as well.

Quick Tip: Don't feel pressured to work in the same order as other artists. Everyone has their own process, just go with what suits your style and generates inspiration best for you!

Now for the mid-ground. The pack has some beautiful rocky hills included. I used the natural occurring contrast to help guide the eye toward the focal point as well.
For the focal point, I wanted to have a castle on a hill (Ed Sheeran will be pleased). Naturally inspired by previously mentioned LOTR and GOT.

I needed to elevate the hill a bit to help facilitate a clearer read of the focal point and did so by extending the rock faces upward.

Next, it was time to address the foreground grass. By adding a slope on the right we help guide the eye again and form a natural occurring road off-center. The landscape was still too bare and needed some extra elements to break up the monotony and build the composition.

I sculpted the ruins in 3DCoat which I’ve been wanting to pick up for some time. I found it incredibly easy to learn and a joy to work with. After sculpting and exporting it, I brought it into Maya to do  quick render. Because of the cloud break, I rendered two images -  one with an overcast HDRI and one with directional light. This gives me the control in Photoshop to blend between the two as needed.

The depth pass was added in the channels as an alpha mask. I created a new layer and color picked the sky, then fill a new layer with the sky color. I then use the depth map as a mask to create depth in the castle and set the opacity to taste.

Next I use the directional light render to introduce some directionality to the castle ruins. It’s a simple process. I add a mask to the layer, press Ctrl+I to invest it to black and paint it in to taste.

Quick Tip: When working with 3D renders, you should take advantage of the ability to create multiple lighting scenarios and angles of light and render those out for combining in Photoshop. You don't get that luxury when working only with Photography!

Time to add some life and storytelling to the piece. I add some waterfalls to indicate that this structure has been in ruins for some time. I also added some wall textures from the pack to add textural detail and believability to the wall of the castle. During the 3D creation process I added scaffolding to imply that the structure is being repaired. It also played into the theme that, while some things may be broken, it is not lost. In keeping with the ruins theme I thought adding some greenery and trees will also help sell the dilapidated and aged feel of the castle. It helps adding more life to the piece as well.

Then it’s time to add some humans to complete the last compositional piece of the puzzle and of course establish the scale of the castle. The right hand side of the painting felt a bit empty so I grabbed one of the towers from the pack and added it to keep the eye from trailing off and add more interest to the piece.  A cloud layer was added on top as well.  For the birds - a last minute addition because what would a ruined castle be without birds flying over it. It’s subtle but it does help breathe extra life into the piece.

Then for the final tweaks - these are mainly color and contrast related with some sharpening and extra contrast to help the image pop.

Here we are - The Castle Ruins! I hope Mr. Lee will like it. :)  Go and download the Image pack and see what you can bring to life with this tutorial's help!

Download Christo's PSD and the assets used to create this image. 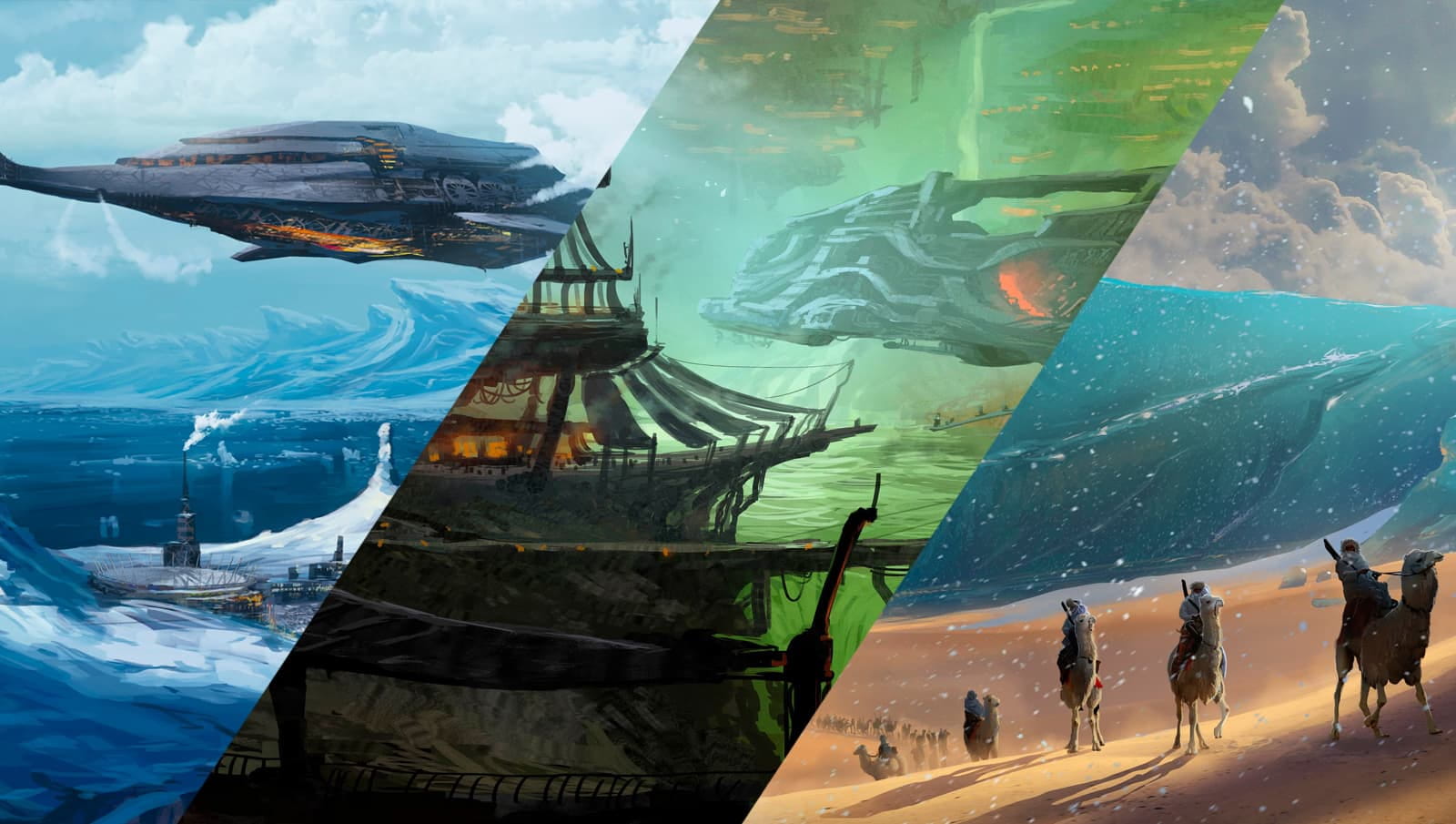 We catch up with Diego Nicolas Agustin; Winner of the Visions of Tomorrow MattePaint Contest and chat to him about the Contest, his creative process and what makes him tick. 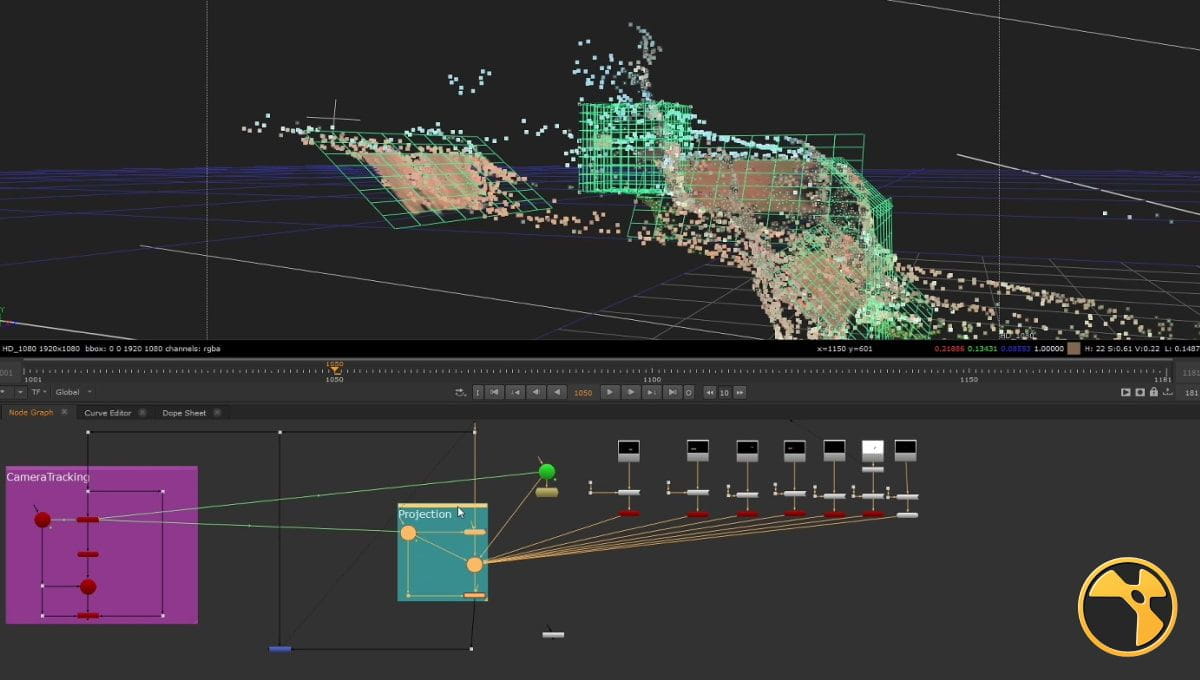 This week in the Academy, Stefan teaches us the ins and outs of Nuke in 4 separate courses; Reformatting Images in Nuke, Camera Tracking in Nuke, Projecting on Cards in Nuke and Advanced Camera Projections in Nuke.